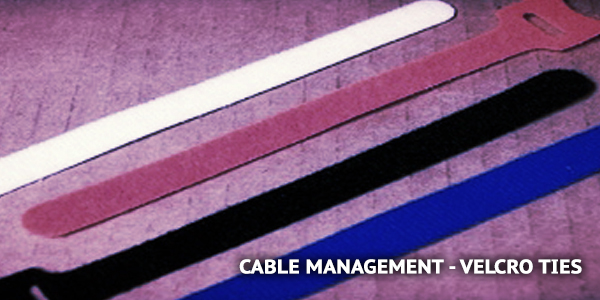 You know what bothers me?  Cable knots.

We have all experienced the frustration of trying to pick up a cable that looks well coiled, and ended up with the worlds biggest ball of rubber coated yarn.  It doesn’t matter if it’s a 3′ pair of earbuds, or a 300′ DMX cable…cables always seem to find a way!

Where were we?  Frustration.  Yarn.  World records.

Then, from the dark, a shining light appeared while I roamed the great blue corridors of my local Lowe’s Home Improvement.  The light was so bright I was blinded.  It was some kid playing with flashlights.  So I turned away from that light, and then these fuzzy little straps called out to me, as if by name.  I purchased them, naturally.  With great ease, and immense satisfaction I wrapped one of the neat little velcro ties around every cable that I owned, and some that I didn’t.

I was changed on that day.  From that moment on, I have had no issues with sifting through bins of cables with not so much as a hint of cable knots.

So, boys and girls, musicians and church tech directors, do yourselves a favor and go get some of these bad boys from your local Lowe’s Home Improvement.  You won’t regret it!

Please fill out the form and one of our Account Manager will be in touch to setup a walk through.